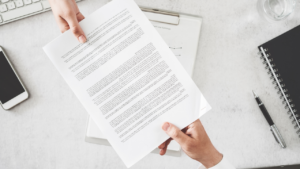 I recently had a serious situation pop up with a coaching client that was attempting to sell house he’d bought last year. Remember one of the top 10 no-no’s of investing in real estate is “never put a house in your personal name OR your company name”. I’m lucky to have mentors that told me this years ago and I never had to learn the hard way. But this coaching client was put to the test. By now you know I always take title in land trusts. I love the way that name sounds so professional and proper but in reality it’s nothing but basic black ink on white paper. Some states refer to it as a Grantor Revocable Trust.

The reason I take title in land trusts is because nobody knows who owns the trust unless I tell them OR they get a court order… And court orders ain’t cheap. A trust has 3 simples parts listed below: The Beneficiary-owns the land trust, The Trustee- Works for beneficiary & signs all documents and The Trust Agreement- 7 page document that spells out what the trust can do. (I guess the 4th part would be the house itself) In essence the Beneficiary receives all the benefit from the trust and the Trustee is a worker for hire. The beneficiary never goes on public record so nobody knows he exists. Each and every time I close on house, the deed says the owner will be the address trust or “123 easy st. trust”. The trust is the owner of the house so if anybody wants to go sniffing around my assets, they’ll never know I have any interest in the house.

Just imagine if the Walt Disney Company or Sentara Hospital or Trump or any other major corporation was looking to buy a property from you. Perhaps you might want to raise the price because you know they can probably pay any price you wanted. Those corporations would most likely NOT make offers in their names, but they can disguise themselves by using trusts. The problem this coaching client had was that he took title in the name of the trust but he did one move that I don’t recommend. He made himself the Trustee and he made his LLC the beneficiary. I’m not sure why he did because the Trustee’s name does go on title as being the trustee. When he went to sell the house a year later, the title co. did a full title search on him(trustee) and his Company(Beneficiary). Through this transaction I learned the Trustee and the Beneficiary gets researched on the title search. As it so happened, he had some large judgments against his personal name and the title co. was demanding that he pay them off before he would be able to transfer title to the new buyer. Just imagine having a $20,000 payday next week when you’re going to sell a flip and the title co. tells you that you must pay off $15,000 in judgments before you can sell the house. Initially my stomach cringed for this poor coaching client but when he told me the house was titled in a trust, I felt like we may be able to get around those judgments. I quickly called the title co. and sure enough, he said the trustee can’t have any judgments as well as the beneficiary. This was very weird because I’ve always been taught and have even taught others that the Trustee has NO BEARING on the Land Trust. The only duty of the Trustee is to sign documents. So, I reached out to Mike Hamar, my “go to” attorney for real estate issues. He confirmed my thoughts that the Trustee’s debts do not attach to the Land Trust itself. So in essence, the Trustee can go out there and get into any type of financial trouble and it has no effect on the trust that owns the house. I got Mike in touch with my Title co. and they cleared everything up and let the closing take place without paying off one single judgment against the trustee.

The point of this story… DON’T TAKE TITLE IN YOUR NAME. You never know when an old creditor or predator is lurking waiting to attack your name and get a judgment against you. Good thing my coaching client took this advice seriously and put his house in a Trust. Now we all know the actions of the trustee has no effect on the trust. But, I don’t recommend you being a trustee for own trusts. Find a friend you trust to sign your docs or maybe a family member with a different last name. Perhaps even a co-worker but don’t use your name. Once you put the house in your name, then creditors can find your assets easily. If you don’t have a friend you trust that can be a trustee for you then you need to get some new friends. Call me, I can be your trustee if you don’t have anybody else. Always remember the Trustee does have the power to sell your house at any time without your permission. So you better choose wisely when it comes to Trustees.  Get out there and make it happen.